The fiddly job of laying the cabin floors is almost completed. Fitting the floors has taken longer than expected. Each component has to be cut-to-fit around the curve of the hull, with its varying angles and intersecting frames. Since the last post, we have glued down most of the floors, and have framed and fitted the floors in the two small cabins forward of frame three. This is the point where the floor levels meet the rocker of the hulls as they curve upwards to the bows, requiring a level change. On the starboard side, this small cabin contains the guest toilet, wash basin, and storage. On the port side, it is a walk in wardrobe.

We have also completed the floor in the space aft of the galley, which is a sort of pantry. It also contains a space for the fridge-freezer. We now have to decide whether to purchase an off-the-shelf unit or build our own enclosure and install a compressor.

The corresponding space on the other (port) side is the main bathroom. Here we have fitted and fiberglassed the shower sump and ordered a low profile pump to fit. The flooring in this space was time-consuming, requiring a fair bit of thinking time. It incorporates both fall and reverse camber, to direct the shower water into the sump. The sump is covered with a bamboo shower grate. A provision was also made for the instrument transducer and intake for the toilet, all to be installed within the sump. This then avoids the need for any skin fittings under the floors and provides easy access.

Next week, we should be able to make a start on the cabinetry, which will be another milestone achieved.

Earlier in the week Pete consulted his Meteye weather App and was dismayed to see large swathes of red, over Port Sorell. Red is never good, as it’s a prediction of damaging winds. The prediction was for gusts of over 120 kph. So Friday was dedicated to preparing our shelter for the blow. We renewed some UV damaged ropes, added some additional lashings, sweated down the big tarp till it was tight as a drum, and generally tidied up. We are vulnerable at the moment as until the decks are on, the interior of the boat is exposed to the elements should the tarp fail. We prayed over our baby, as is our practice, asking God to watch over her, and went home.

At the predicted time of 10 pm (how do they do that?) it hit hard, but quickly tailed off and was all over by around midnight. It was a classic big-end-front not uncommon in the Strait. Pete and his brothers encountered one, mid way when competing in the 94 Sydney Hobart. Pete was on watch at the time and noticed a white mist approaching rapidly from the west. The skipper took one look and called for all sail down. The navigator, Ian Johnson was highly experienced and reassured them, saying ” It will hit hard, with a few big gusts, then settle down to a steady gale. If we give it half hour, the worst will be over and we can set the heavy weather sails and get going again.” He then switched on the HF and they settled down to listen to the radio traffic. Boats were reporting gusts of 80 knots (140kph) over the decks. Many retired in the first 20 minutes of the storm, probably feeling a little foolish later. Bass Strait has a fearsome reputation, and some were not willing to risk crossing in a gale. Two years later six sailors were lost in a much worse, sustained storm.

Back at Selah, we inspected the site this morning (Sat) and were thankful that she and the shelter came through unscathed. Maximum gusts were 102 kph but were not sustained so there was little damage in the area. Just another blow in the wild north coast of Tas!

The blue dot is our location, the colour overlay predicted wind strengths of 120kph. Red is never good! 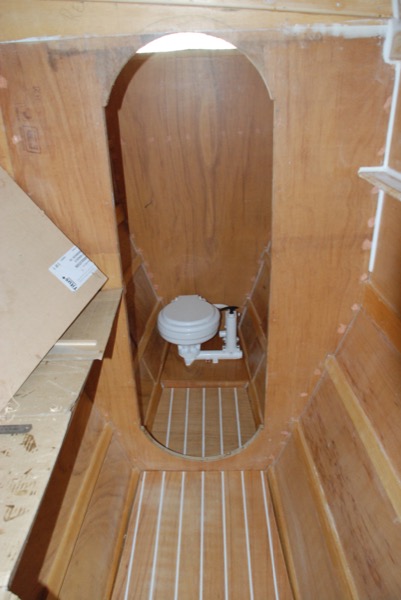 Checking the guest toilet for fit. The jump-up in the forward cabin is evident.

Bits of flooring coated with resin and detailed ready for gluing down.

Cant imagine doing this project without the laser lever. Here Pete was using it to check the center line.

We used lead weights to hold down the floors when gluing. 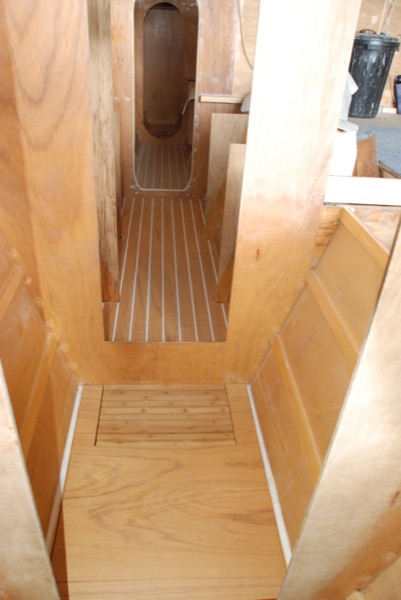 Glassing the shower sump. We hope to install the transducer and toilet water intake here as well. 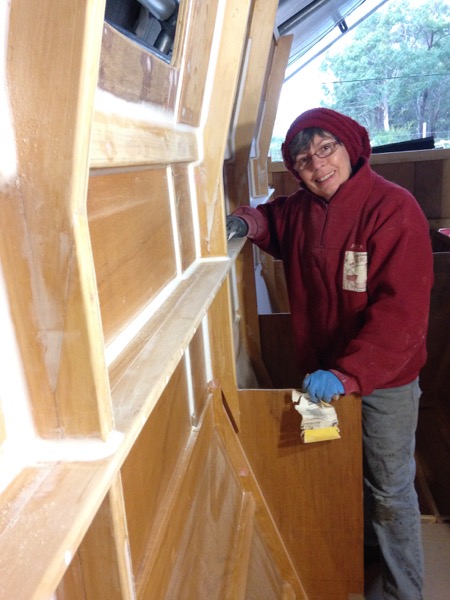 4 thoughts on “Floors and big-end-fronts”