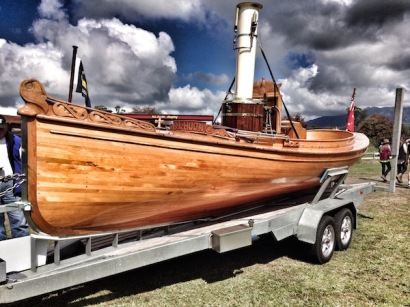 Back in Alice winter was our festival season. Every weekend a concert or community event. Here in Tassy the summer weekends are full of potential activities to distract us from the build! But we are not complaining. Today we took Debs parents to the Shefield festival of Steam. Here are some photos of the day. I really enjoyed the steam launches especially SL Huon, a magnificent steam driven 30′ river launch build from Huon Pine. The photos speak for themselves. Pictured is my dad-in-law Rob checking out the old farm tractors. What I wasn’t expecting to see however was the historical 1st world war display. It was quite moving to see the cavalry display with authentic period uniforms.  I thought of my paternal grandfather. In 1914 he enlisted with the Light Horse, eventually serving in the middle east campaigns. Like many others, he never spoke about his war experiences. The ANZAC day and RSL traditions were not celebrated in our family. When the second-world-war loomed he loaded his three sons into his Model T, and drove them to the Naval Shipyards in Whayalla, SA. As apprententice shipwrights they would not be required to enlist as soldiers. He was not going to let them experience what he did. He did what he thought was right to protect his boys from the horrors of war, and I respect him for that. As a result my father became a fully qualified shipwright. My other grandfather also was a yachtie and boatbuilder: his story is for another day. But in many ways SELAH is a tribute to them both.

One thought on “Steam, Huon Pine, Tractors and war”